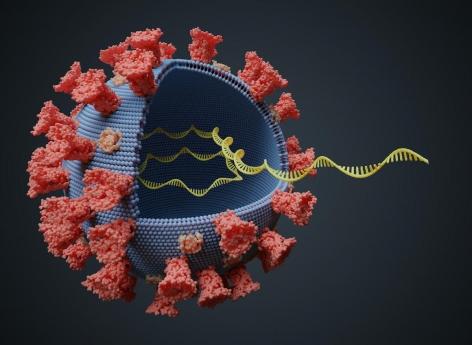 Mutations in the new coronavirus SARS-CoV-2 continue to agitate research and give rise to work that leads to results that seem contradictory. That the virus has mutated is a certainty because, as recently claimed to Why doctor Etienne Simon-Lorière, responsible at the Institut Pasteur for the Evolutionary Genomics Unit of RNA Viruses, “SARS-CoV-2 mutates to survive. When it enters a cell, it replicates as quickly as possible before the immune system begins to activate. Hundreds and hundreds of copies can be made, because SARS-CoV-2 has an ability to absorb small changes in the genome which is quite large.”

A mutation at the origin of the pandemic

Are these mutations responsible for the rapid spread of the virus? Yes, several studies suggest. The mutation, known as 614G, was first spotted in eastern China in January and then quickly spread to Europe and around the world. There is no evidence that with this mutation the virus causes more severe symptoms, kills more people, or makes it harder to develop vaccines. On the other hand, this mutation means that the virus can more easily penetrate the cells of the nose or throat and therefore infect patients more easily and quickly. “The change in the virus genome seems to have had a big ripple effect, said David Engelthaler, a geneticist at the Institute for Translational Genomics Research in Arizona, interviewed by the New York Times. In the end, it could be that this mutation is the cause of the pandemic..”

But these conclusions have just been contradicted by a recent study, published on November 25 in the journal Nature Communications, where the researchers felt that no currently documented mutations in the virus increase its transmissibility. This research is based on the analysis, carried out by scientists from the University of California, CIRAD, the University of Réunion and Oxford, of the viral genomes of more than 46,000 people with Covid-19 and from 99 countries. “We have found that none of these mutations allow for a faster spread of Covid-19 but we must remain vigilant and continue to monitor for new mutations, especially as vaccines are rolled out.”, Continued Dr Lucy van Dorp, lead author of the study.

The D614G mutation, neutral for the virus

In total, 12,706 mutations have been identified. For 398 mutations, there is strong evidence that they occurred repeatedly and independently. The researchers focused on 185 mutations that have occurred at least three times independently during the pandemic. To test whether the mutations increase the transmission of the virus, the researchers modeled the evolutionary tree of the virus and analyzed whether a particular mutation was becoming more and more common in a given branch of the tree, that is, whether descendants of this virus outperform closely related SARS-CoV-2 viruses without this particular mutation.

Researchers have found no evidence that any of the common mutations increase the transmissibility of the virus. Instead, they found that the most common mutations are neutral for the virus. This includes a mutation in the peak protein of the virus called D614G, which others have pointed out as the cause of the rapid spread of the virus. “The virus appears to be well suited for transmission between humans and may have already reached peak physical form in the human host by the time it was identified as a new virus.”Conceded Dr Lucy van Dorp.

Mutations, not a problem for vaccines

The researchers agree on one thing: mutations will not affect the effectiveness of the vaccine. A September study already claimed that mutations will not affect the vaccine, claiming that the low viral diversity of the virus opens the door to a single vaccine. “The news on the vaccine front is great, confirmed François Balloux who took part in the study published in Nature Communications. The virus may well acquire vaccine leak mutations in the future, but we are confident that we will be able to report them quickly, which would allow vaccines to be updated in time if needed..”